Some interesting facts relating to the BRAHSS project

Air guns used in the surveys generate high level pulses of sound that penetrate the sea floor and are reflected back from the underlying rock strata to receivers towed by the survey vessel. The structure of the rock strata can be determined from this data. 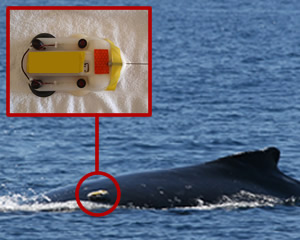 The development of the Digital Acoustic Recording Tag has greatly assisted the study of marine mammals which is often severely limited by the creatures' relatively short surface time coupled with their difficult to track submersed behaviour.

The tag records an array of synchronous data namely sound, orientation (3 dimensions), depth and heading. The tag will automatically detach itself at the end of the recording period after which it can be tracked and subsequently recovered by means of an inbuilt VHF beacon.

As the lightweight tag is attached by suction cups, the impact on the whale (physically and behaviourally) is minimised.

Visit the Woods Hole Oceanographic Institution for the full story.

"Ramp-up" or "soft start" is a procedure that is conducted at the start of a seismic survey. Sound levels are increased in steps over a period of 20 to 30 minutes until the full sound output of the seismic array is achieved. It starts with one air gun source and others are added step by step. The idea is that this alerts whales to the seismic survey while the sound level is low and gives them time to move away as the sound output increases.

Seismic survey is used by industry to locate oil and gas deposits under the sea floor as well as by geosciences research of submarine rock structure. Survey vessels tow an array of hydrophones which receive the reflected signals transmitted by compressed air guns.